Summer Tan - what I used to fake it this Summer!

Sunday, 25 September 2016 Leave a Comment
So here is a post to show you which products I used to feel less pale on holiday.  We had an amazing week in Southern Spain but it was super hot so the Factor 50 came out and I hid under a big hat in the shade.  I managed to fake a tanned glow by using a combination of the three products below and I was really pleased with the results.  Sadly, for me, these products have been wiped at the nozzle and put away in a dark place until the sun (and my legs) come out again next Spring.  Bye legs, bye tanning products, hello leggings and tights!

Garnier Ambre Solaire No Streaks Bronzer
If I'm honest I bought this quite a long time ago, used it once then it went back in the cupboard.  I found it when I was sorting out and decided to use it.  It was only after I'd sprayed it on my legs that I had the sudden thought that there might be a best before date on it and it might have gone off but by that time it was too late, whatever would be, would be.  Luckily for me it hadn't gone off and there were no orange after effects.  As I'm really quite pale I only needed two applications for it to change the colour on my legs, and even though I took it away with me I didn't use it as I topped up with the other products.  I'll probably buy another one next year.  It was easy to apply and it even though I'm usually terrible at applying fake tan this was easy and I didn't miss any bits.

Dove Derma Spa Summer Revived Body Lotion with Tanning
Check this out!  Dove have come a long way in the last ten years, some of you will remember the original Dove tanning lotion that smelled like biscuits even after it was long dried (it wasn't only Dove, the Johnson & Johnson one was bad too).  Well, this is nothing like that one.  It feels more like a luxury body lotion than anything else and sinks in straight away.  To be honest, I'd use it as a body lotion anyway, regardless of the tanning element, it really did make my skin feel lovely and soft.  I found that the moisturising element was really long lasting and it didn't smell at all bad. 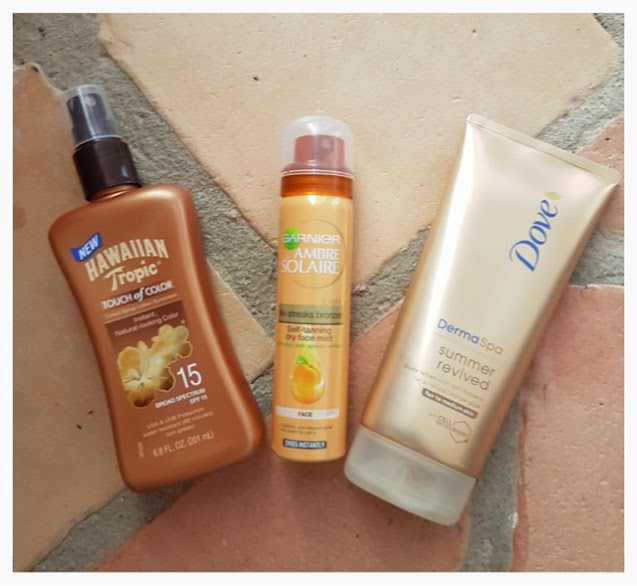