Gradual Self Tanners | The Review!

Wednesday, 18 June 2014
Hi beauties, I've finally got round to writing about the self tanners I've been testing for the past few weeks, its taken a while to get this one posted but here it is.

I'm very fair skinned and while that's not a major problem for me I do like a bit of a glow, particularly on my legs in the summer.  I've tried permanent tans such as Fake Bake and St Tropez and they just don't suit me, they are almost always too dark and make me look a bit odd, like someone with my colouring shouldn't be that orange!

This is why I really like the gradual moisturising lotion tanners.  They've changed a lot in the last few years, I remember the first one I tried, it was a Johnsons one, the smell was awful and I had to be careful to rub it in properly because otherwise after an hour or so I'd be left with tan streaks.  The problem with being so pale is that any hint of colour on top of my paleness shows, so I have to be careful with application.

Anyway, the last couple of years I've used Dove which has served me very well and I was happy with the smell and the colour and Dove is such a nice moisturiser anyway.  This year I thought I'd try something a bit different.  So I chose three (clearly I'm hoping for a long, hot summer!), they are 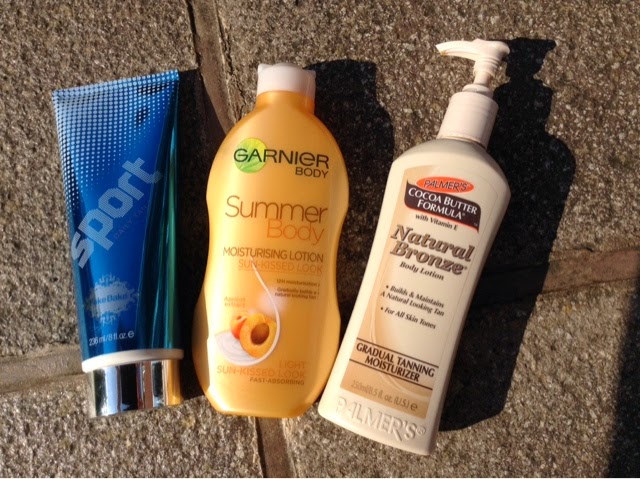 So now onto the review.

First up is Fake Bake Sport.  I bought this from Beautybay.com for £10 after reading really good reviews about this product.  Unfortunately it has to be said I don't agree with the reviews!  The smell is terrible, really strong.  Its got all this really good stuff in it, like Vitamin E and special moisturisers and its paraben free (which is good) but the tan was too orangey for me and, like I said, I couldn't stand the smell.  So I wouldn't buy this again.  I only used it once, so I've got a lot left!

The next one I tried was the Palmers Cocoa Butter Natural Bronze.  This tanner is for all skin types, there's not a separate one for fair or dark.  It smells very much like Palmers Cocoa Butter (well, it would, wouldn't it) and though there is a hint of that "tan" smell its not unbearable, actually its quite nice.  I put it on my legs first and by lunchtime they were very definitely no longer the alabaster colour they'd been first thing in the morning.  Clearly, on pale people this stuff makes a difference quickly!  I only needed one application of this, I didn't put it on the next day as my legs were already quite a nice colour for me but if I'd had darker skin I'd have put on another lot and got a really nice tanned glow!   I made the mistake of not exfoliating properly so my knees were a bit orange but not drastic, but that's my fault, not Palmers.  I'm trying to remember how much it was, it wasn't much, about £4 I think, I got it in Superdrug but you can also get it in the supermarkets.  Its going to take me a while to get through this bottle but I'd definitely get it again.

Finally, I picked up Garnier Summer Body, I got this for £5 in Superdrug.  I'd seen an advert for it and I knew they did two types, a light one for fairer skin and a medium one for slightly darker skin.  I really like this product.  For a start the smell is nice, yes you can smell the tanning smell a bit (but you're never going to be able to get away from that until come clever person figures out a way to get rid of it) but a more overwhelming scent is that of the apricot and peach fruit extracts that its got in it.  This moisturiser is fast absorbing so you can put it on quickly and its not sticky and does leave a really lovely glow, not overly dark so you are able to build up over a few days.  I also found that it took a while to fade, I had a couple of days where I didn't use it and my legs still looked good.

So, in conclusion, my favourite out of the three is definitely the Garnier Summer Body, purely because I would use this daily as a moisturiser, as well as the benefit of a nice glow, you are left with a glorious nourished skin feeling whereas the Palmers, although really nice, is quite dark on me and I'd use this if I needed a "fix" i.e. lots of colour quickly!  I think the Palmers would be absolutely perfect if I had slightly darker skin though and again, a great moisturiser, as I love anything with cocoa butter in it.

So there you go.  I'd be really interested to hear if you've tried any gradual tanners and which ones you recommend.