On Sunday it was the BAFTA Awards, hosted by Stephen Fry, who is one of my favourite people and as usual I was on Red Carpet Duty from the comfort of my living room sofa with the dog sleeping on one side and a cup of tea and family size bag of Maltesers on the other.  The dog kept trying to get the Maltesers even though I've told him chocolate isn't for dogs.  He had to settle for a Dentastik.

I have to say there wasn't really a dress that stood out per se, (I have higher hopes for The Oscars in a fortnight) but here's a few of my favourite outfits on the night.


So here's Fearne Cotton and she's got it right - again!  I can't quite decide what the dress is made out of but its lovely, at least on her.  That neckline wouldn't suit everybody (least of all me) but it looks fab on her.  Plus I really love her hair.  When I had my hair cut a couple of years ago that's what I was going for.  I didn't quite manage it hence spending the last 12 months "growing it out".

Very impressed with Angelina Jolie for going for something completely different, she looks great in this suit, actually both she and Brad looked really great.  I love her smoky eye make up as well. 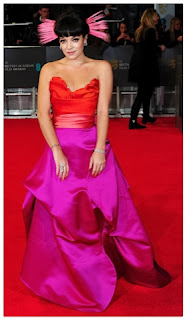 It seems from reviews I've read,  this dress that Lily Allen wore got mixed reactions, I've seen her in the "worst dress" pages a couple of times this week.  I happen to think think it suits her (not sure about the  pink hair, mind you) and actually I'm quite envious as with my colouring I really would not be able to pull off either bright orange nor fuschia pink and especially not together!

There's a lot of gorgeous clashing, bold colours about at the moment, Sandra Bullock wore something similar to the Golden Globes awards.  I think this dress suits Lily's personality so good for her. 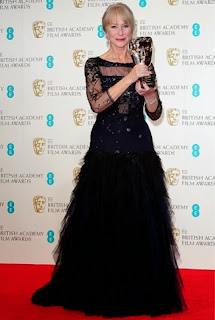 I couldn't possibly do a post on the BAFTAs without mentioning Dame Helen Mirren because she got a special award presented to her by Prince William or the Duke of Cambridge, however you want to call him.

Regarding her dress, I think she looks sufficiently regal in it to be receiving such a prestigious award, its also a bit quirky with the skirt being so different to the top half of the dress.  I hope I look as good as her when I'm 60-something (but I doubt it!). 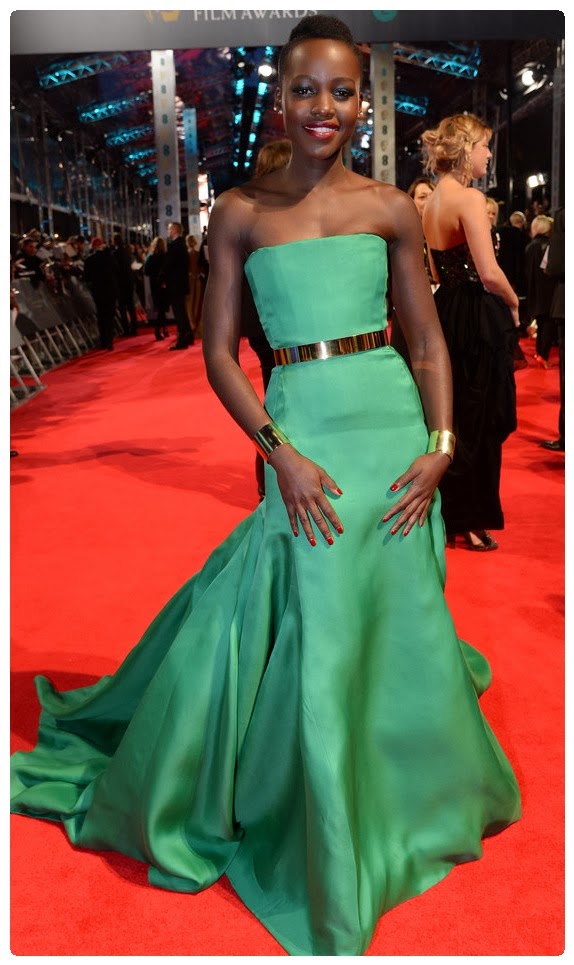 This is lovely Lupita Nyong'o who stars in "12 years a slave" which has been nominated and won lots of awards already this year.  This is such great dress, the skirt is sort of fishtail but does have a little train at the back and Lupita looks great in it but its the dress colour that really makes it, I love green, in all the magazines I'm reading recently green is definitely making a comeback, both in clothes and in make up as well. 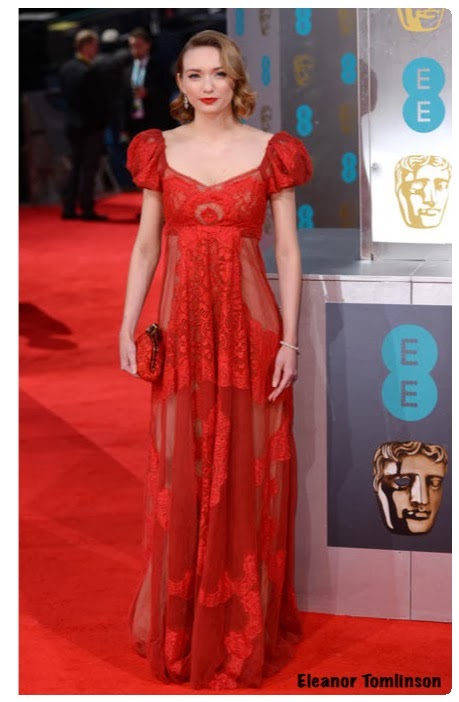 I think this is probably my favourite dress of the night because a) its red which I love and b) its such a beautifully flattering empire line style and c) how gorgeous is this material?


The Oscars is on Sunday 2nd March.  The dog and I are ready!